Bastl Kastle is so much fun 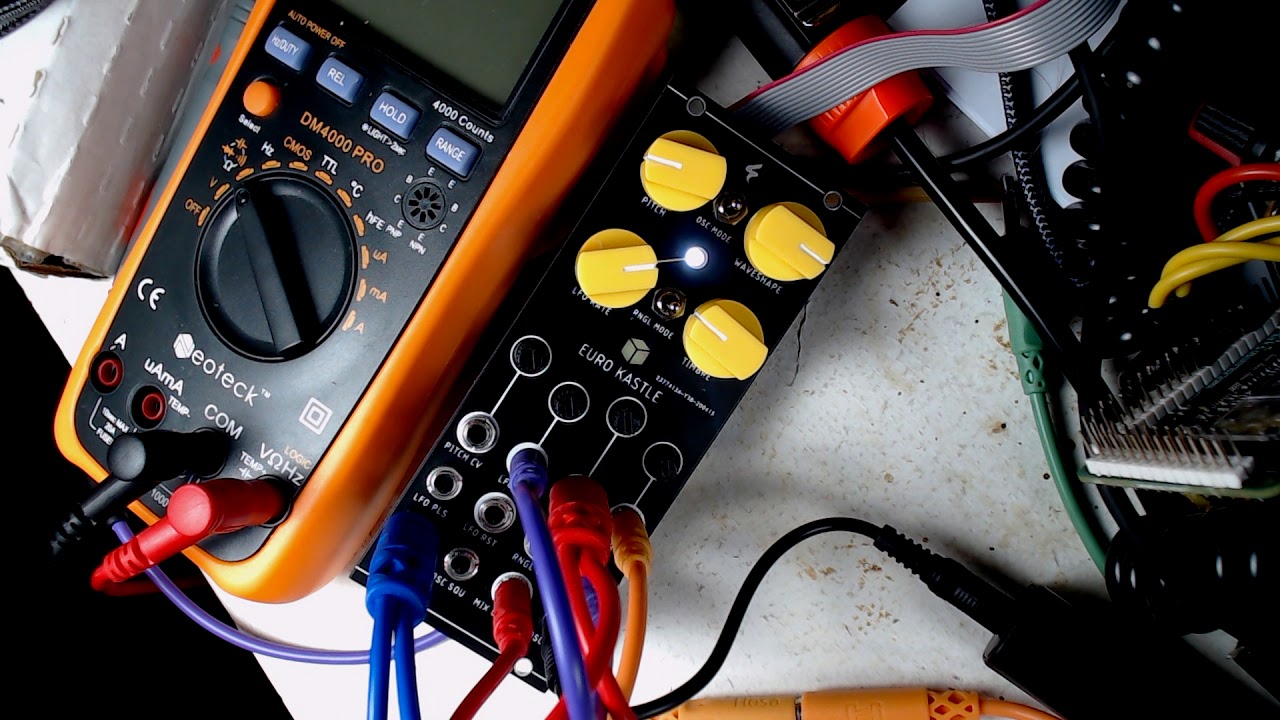 I built this semi-kit from the Spherical Sound Society this summer, forgetting, of course, the most trivial items from the BOM: a 47Ω resistor, an SMD LED, and a tiny SMD potentiometer. But, after grumbling for literal months about spending shipping on literally 34¢ of parts and unable to find anything else I immediately needed on Mouser, I just ordered a bunch of them, soldered in the LED and pot (having already replaced the SMD resistor with a TH one bent into a workable shape) and plugged them into the Black Centipede, (my daisy chain power supply built out of a hacked up, super quiet computer PS).

I was rewarded with the sound of the fan stopping. That meant that the fuse blew inside the power supply. And that meant that there was a short somewhere in the construction of my first-ever SMD project. I was not looking forward to figuring out what was wrong.

After a day of deep breaths, I replaced the fuse (it’s a pain in the ass. I’m going to replace it with an external circuit breaker since I need to be able to power things to test them), then tested the power supply, the cable, and the power adapter I’d built to go from the Black Centipede’s Neutrik Speakon connectors to a Eurorack connector. I was distressed to discover that everything was fine. That only left the Kastle.

So I tested continuity to see if there was any where there shouldn’t be, as far as I could tell.

So I had only one thing left to do: plug it in. turn it on, and see if I could see, smell, or hear anything.

I flipped the switch, and one of the LEDs came on briefly, then dimmed. Uh oh.

…but then it came back on again! Waaaaait…this is the LFO light! It’s oscillating! And nothing smells like burning plastic!

It’s been running since last night. Nothing is hot, nothing smells bad. And instead of the firecracker sound of an IC popping, it’s making much more sustained, weirder sounds!

I’m finally dedicating this CD caddy I’ve got to its destiny as a Eurorack case. The first module will be the Kastle. The second will almost certainly be an Akso, once I’ve determined exactly what it should be doing.

So here’s my “Rack”, a cassette caddy I got at a thrift store.

A little measuring, drilling cutting, grumbling while remeasuring, and drilling, and the Kastle fits in! Underneath it is where an Akso will go once I’m done with the 101-level tutorial. I think it might be a pitchcompressor coupled with some sort of wavefolder and an envelop generator. There’s a lot of computing power in there so I want to pick as much stuff into the module as I can stand. 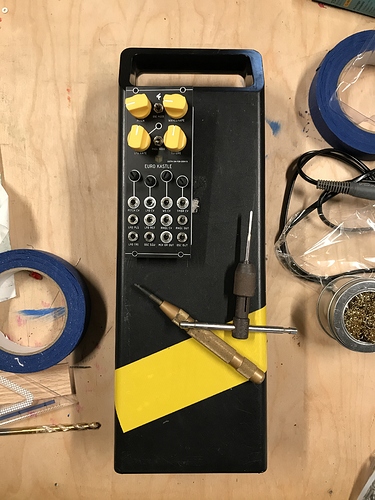 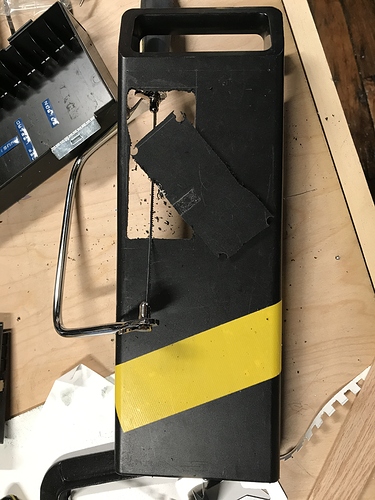 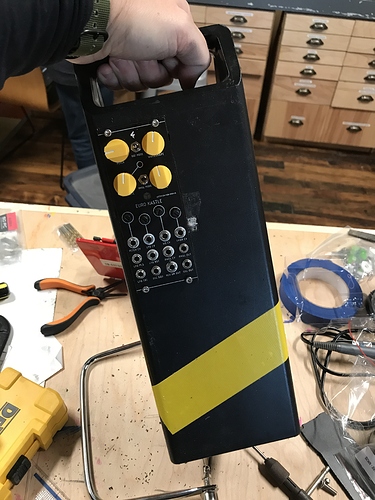 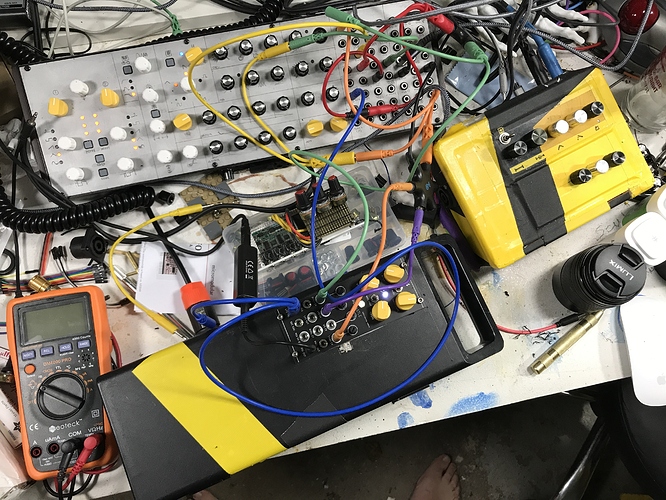 And last night, I got down to building a little power bus for it. The Black Centipede puts out ±12V and +5V through its Neutrik Speakon connectors, and then each device has two plugs so they can all be chained together without making a particularly onerous spaghetti mess.

You can see the Kastle has its own ribbon cable. I was going to just plug it in and let it be, then decided that I’d give Future Me a gift and leave actual connectors. In principle, they’re Eurorack-compatible, though the 5V pins get in the way of the regular 10-conductor ribbon cables so I’ll probably have to build new cables for each module anyway. 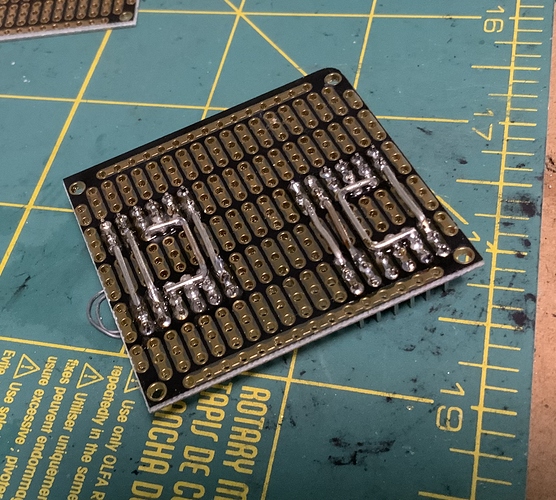 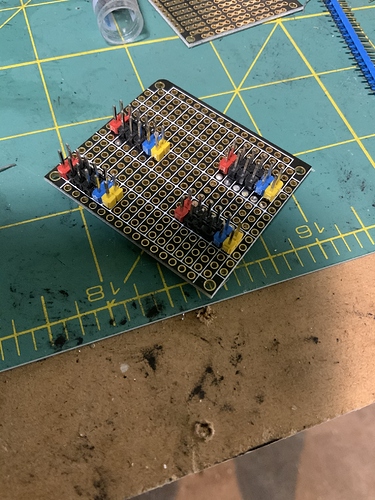 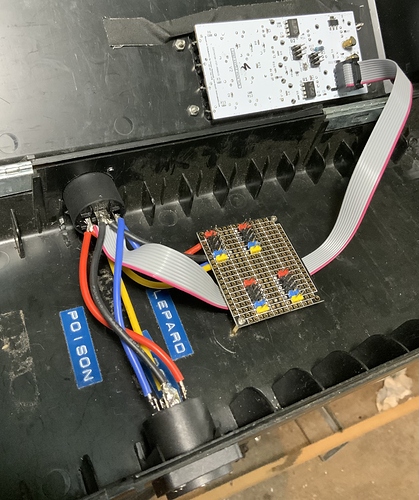 The POISON, DEF LEPARD, MUSIC, and RAD DOG labels were on it when I got it. I’m figuring out how to integrate them. At the very least, the RAD DOG label is going to get glued to the outside as its nametag.

Nice work Josh! True hacker style I love it. Why the convoluted power solution (just to get both 12 and 5 volts?, and why are you using speakon connectors instead of the standardized powercon ones if you’re going neutrik?

The convoluted power system allows me to run a daisy chain between different devices while having only one power supply. The Neutron will gain plugs to it and the Voice Nodulator already works with it.

In short, I don’t want things in a rectangular case. I want each instrument to be its own idea and have its own evolution of form as I build it.

Powercon, as far as I understand, only has 3 connectors, right? Because it’s grounded 110 (120?). The Black Centipede carries ±12V and +5V. The PS has a regular D plug to a grounded connection.

Usually experienced builders recommend against using computer power supplies but I tested this thing when it was given to me and I could find no noise on the scope. I still include caps to filter any noise that might come through but the scope is pretty firm on there being no noise being generated. It’s a shielded power cable, too.